Is marijuana addictive? That query is easily one of the most frequently asked questions in the addiction and behavioral health space. I hear it on an almost daily basis. And as for its answer… well, there are as many opinions and viewpoints on that subject as there are people who have them. Furthermore, in light of recent events regarding marijuana’s growing legalization in state governments, this conversation is all the more relevant today.

So rather than toeing a party line or beating a scripted drum on marijuana in an effort to meet someone’s agenda, let’s just have a candid and analytical conversation about the drug. Let’s examine some facts, talk about some of the recent studies which have come out on marijuana, and let’s engage in some polite discourse on that heatedly debated plant known as cannabis.

What Does It Mean to Be Addicted to Something?

To understand the implications of marijuana addiction, we have to look at the phenomenon of addiction in general. What does it mean to be addicted to something? I find that the best summation of addiction is:

“A physical and/or behavioral reliance upon a substance, activity, sensation, etc. A need for a thing which is so strong that one cannot stop using, consuming, engaging in, or experiencing that thing.”

A physical and/or behavioral reliance upon a substance, activity, sensation, etc. A need for a thing which is so strong that one cannot stop using, consuming, engaging in, or experiencing that thing.

That is the first half of the definition of an addiction. There’s a second half that is often forgotten, and this next half is critical.

An addiction is an addiction because it is an extremely powerful reliance upon something that the individual continues to associate himself with even when it harms him or those around him.

Can you think of any instances in which someone might use marijuana in such a way that they don’t want to stop using it, and they’re using it to the extent that it is harming them in some way or that it is harming others? I sure can.

What the Research Says

Probably in light of the growing legalization of marijuana, a bunch of research has come out that talks about the drug honestly, neutrally weighing and examining the substance for what it truly is.

In a nutshell, the research says, “Yes, it’s addictive. No, it’s not nearly as bad as just about all the other drugs out there are.”

That sounds about accurate to me. The only caveat I’d add is that addiction is as bad as it is experienced by the person who is addicted to it. A terrible marijuana habit for Joe might seem more harmful to Joe than an occasional heroin habit might appear to Bill. There is a relativity factor here.

But I digress. Yes. Marijuana is addictive. No, as a general rule, it is not as bad as most of the other drugs one could get their hands on.

The Pew Charitable Trusts organization released a research paper on marijuana, calmly and coolly examining the addictive factors of the drug. The Pew research confirms that marijuana is addictive, yet the threat of developing a habit from using marijuana is not as high as it is in alcohol consumption or cocaine use. According to Pew author Christine Vestal, “At fewer than 1 in 10 users, marijuana’s estimated rate of addiction is lower than cocaine and alcohol (15 percent) and heroin (25 percent). Unlike opioids and stimulants, marijuana dependence tends to develop slowly: Months or years may pass before debilitating symptoms begin to negatively affect the average dependent user’s life.”

So that is something to consider. Will you become addicted to marijuana after just one use of the drug? Probably not. Some people do, but the majority don’t. But given the genuine addictive factors that are involved with marijuana, plus the harmful side effects, why would you even want to risk it?

Inhaling some cannabis is no great breath of life. It’s not going to change your life for the better. There is a zero-gain factor from it yet there are very real harmful factors involved with it. Are those harmful factors blown out of proportion and demonized in the media? Sure. But they’re still there.

Now let’s consider the words of caution from the National Institute on Drug Abuse, the nation’s leading organization on monitoring and reducing the U.S. drug problem. In terms of priority of address, marijuana ranks pretty low in the annals of NIDA’s research. However, there is one area of marijuana consumption that NIDA is particularly concerned about, and that’s the phenomena of young people using marijuana.

According to the NIDA research, young people who use marijuana are far more likely to develop a habit with the drug than older adults are. According to NIDA’s text on the matter, “People who begin using marijuana before the age of 18 are four to seven times more likely to develop a marijuana use disorder than adults.” NIDA also goes on to say that “In 2015, about 4.0 million people in the United States met the diagnostic criteria for a marijuana use disorder; 138,000 voluntarily sought treatment for their marijuana use.”

And this brings us into yet another sphere of evidence for why marijuana is addictive. If marijuana was not addictive, then why would over 100,000 Americans seek help at treatment centers for marijuana addiction every year?

Last but not least, there is the issue of marijuana potency. When our parents hear us millennials talking about marijuana as an “addictive substance,” they probably laugh at us. The Baby Boomers knew the marijuana of the 1960s and 1970s to be a purely natural drug which contained only about 1-3% THC (THC is the active ingredient in marijuana which makes it mind-altering and potentially addictive).

When It Comes to Cannabis, It’s Best to Abstain

I will go on the record to say that, if we are comparing the damaging effects of drugs, marijuana is simply not as damaging as other street drugs, at least not usually. But even that is relative. What about the rising incidence of automobile accidents due to marijuana-impaired driving? Most of which have come about since the rise of marijuana legalization on the state level? USA Today has the story on that tidbit of news that marijuana supporters don’t want you to know about.

Marijuana is and can be addictive. It has harmful effects on the body and mind of those who use it. Recent studies out of France show a connection between long-term marijuana use and memory loss. Research projects out of the American College of Cardiology now show a relationship between marijuana use and certain types of stroke and heart failure.

At the end of the day, I refuse to buy the belligerent party line that, “Marijuana is only slightly less awful than heroin,” as was delivered by former Attorney General Jeff Sessions. But we cannot deny the fact that marijuana does carry with it harmful factors, adverse side effects, unpleasant ramifications of its long-term use, addictive elements and so on.

I have to ask, if a substance has a plethora of potentially harmful factors for you, why would you put it in your body?

What Do Legalization, Marijuana, and Pregnancy Have in Common?

One of the most concerning things about increasing marijuana legalization is that individual states are quickly legalizing cannabis before truly understanding the potential risks in doing so . 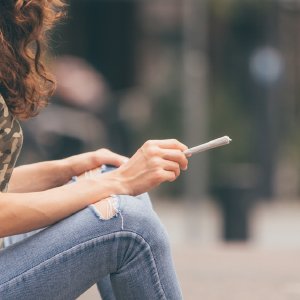