An Open Letter From One Addict’s Mother to Another

To anyone who reading this that either has a family member or you yourself are struggling with addiction: Narconon Arrowhead saved my daughter’s life.

For me, it was all a bad dream. I never would have thought my daughter would have an addiction problem, I mean I protected her from everything! I didn’t even let her ride her bike around the block alone at 13.

It all started when my daughter, Lexie, turned 18. Lexie had a boyfriend that I didn’t like, but I didn’t know why.

Lexie began to grow more and more distant, but I dismissed it because I thought that’s what college kids do- but they always come back….right? I was in denial until I saw her bank statement where thousands of dollars disappeared extremely quickly. This was unlike my daughter who would always save her money and spend mine, so to see this happening I knew something was wrong. I tried to get a hold of her but there was no response.

When I discovered she was addicted to drugs, being the engineer I am, I did research day and night for a week until I found the right program. I didn’t want drugs to wean her off drugs, and I certainly didn’t want a 30-day program because I knew only one in twelve of them would stay clean for a year and the rest of them will fail before that. Through the process of elimination and talking to her friends I figured out what she was using so that I could find the best program to help my daughter, but there was still one problem: how do I find her?

My detailed research lead me to Narconon. This program was like no other.

They could not only help Lexie break her addiction but to dig deep and find out why she started using in the first place. Still, I didn’t know how we were going to find her. The consultant I was talking to on the phone said that wasn’t a problem… I was stunned—what? She told me Narconon works with interventionists who find people who can’t be found. I was blown away. They even got an interventionist on the phone. We booked his flight out to New York the same day. Once he arrived, Bobby [the professional interventionist] met with me.

My daughter changed into a girl I didn’t even know anymore. Luckily, I had gotten some information from the boyfriend’s mom that helped. Bobby popped her out of hiding in less than 8 hours. After a few failed attempts at an intervention, she agreed to go to the program and give it her all. Bobby, Lexie, and my mom got on a plane and brought her to the facility.

Once Lexie was on the road, I received my first phone call of many from Narconon. They promised phone calls with updates every few hours from the facility. Explained in detail how everything would go, and promised to keep my daughter safe. The second phone call was from a staff member at Narconon. She updated me on what time she would be arriving at the facility and reassured me that everything was OK and she will make it. You see, Lexie, was less than 100lbs when we found her, vomiting everything she ate and drank from the withdrawal. I was so scared I was going to lose my daughter to this awful drug. When she arrived at the facility they decided to transfer her to the hospital for IV fluids to stabilize her. This was a great call. The doctors told her they had no idea how she was standing. Once stable, Lexie went back to Narconon. There they began the real work.

They started detoxing the body with the sauna program and giving her tools for the future. I could hear her every day getting back to the old Lexie, the one that was happy and full of life. She started to understand herself and once again believe in her dreams! I was so happy!

Dealing with the staff at Narconon was great! They were always pleasant and would keep me updated on her progress. In the beginning, they even told me about some of the things that might happen and how to handle those types of situations. Everything they told me occurred, and they even made it a point of calling me at least once a week and more if they felt appropriate to keep me informed. If I called them, they called back promptly. If I had a question they answered it straight forward and honestly.

“It’s been six months since she started this program and has not touched a drug. She can be around others at social events and has absolutely no desire to go back. She is making decisions for herself that she would normally let others make, and is confident in what she believes. I see values that had been so buried coming back! Lexie is now getting all her stuff lined up to go back to school in January to become a nurse- and I happy to have my little girl back.”

It’s been six months since she started this program and has not touched a drug. She can be around others at social events and has absolutely no desire to go back. She is making decisions for herself that she would normally let others make, and is confident in what she believes. I see values that had been so buried coming back! Lexie is now getting all her stuff lined up to go back to school in January to become a nurse- and I happy to have my little girl back.

Narconon proved to be the best drug treatment center out there. They have a caring and effective staff and facility and in no way tried to force religious beliefs of any kind on my daughter or myself. I checked into the science behind their methods and its workability and most of all, its success rate. I do not believe in rumors or disgruntled opinions of others who blame others as their primary operating basis. I believe in science, facts, and results! I researched the methods of Narconon before I decided who to trust with my daughter’s life. After much research into other facilities, methodologies and staff I chose, along with my daughter, Narconon. And I am glad I did on so many levels.

Narconon methods saved my daughter’s life and that’s what matters to me!

—T.J. Mother of a Graduate

Note from the Editor: Bobby Newman, the professional interventionist referred to in the story is an independent certified interventionist and drug and alcohol counselor.

I Have My Daughter Back

When I first found out my daughter was using drugs, I knew I had to get her help right away. I had previously worked at a Narconon center myself and had some reality about how to help people who are addicted to drugs. However, when it comes to your own daughter, it is harder and more difficult. 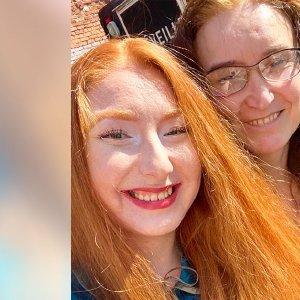