“It can’t hurt you; it’s a plant.” “How can a substance that comes from God be addictive?” “If it’s a naturally-occurring substance, how can it be bad for you?” “If we weren’t meant to smoke it, it wouldn’t be here.” “People have been using these plants for thousands of years, why is it so wrong to use them now?”

These are just a handful of lines that anyone who’s spent some time in the addiction and recovery space will inevitably hear. People who use drugs tend to have a long list of justifications and reasons for why it is okay for them to do so. And that’s because most people know, deep down inside, that using drugs is wrong. So they must concoct reasons and defenses for doing so, even if such concepts are illogical.

When it comes to plant-based drugs like marijuana, peyote, salvia, and kratom (just to name a few), the truth is that such drugs do have very harmful effects. And in addition to the inherent toxic nature of such substances, these plant-based drugs are usually unregulated. That allows other variables to enter, creating further risk and danger.

Case in point, it wasn’t that long ago that a large batch of kratom, a plant with opiate-like properties, was found to be contaminated with Salmonella.

In June of 2018, the National Center for Complementary and Integrative Health wrote a paper on the Salmonella outbreak. The paper’s focus was on kratom substances that had been contaminated with Salmonella. At the time of that writing, there were still possibilities of people being exposed to Salmonella. Not all Salmonella-contaminated kratom had yet been accounted for. And that may still be the case today.

In 2017, the FDA, the CDC, state officials, and local inspectors began investigating a multi-state outbreak of a particularly rare strain of Salmonella. The contaminant was cropping up in kratom and kratom-containing products. And that is also quite dangerous because Salmonella is undetectable without special equipment. Furthermore, Salmonella does not just infect the humans it comes into direct contact with it. If a Salmonella-infected item is placed on an inanimate object such as a counter or table or another surface, that surface then becomes contaminated with Salmonella, thus further spreading it.

And the Salmonella issue is only half of the problem. By itself, kratom is already dangerous. Quoting the National Center for Complementary and Integrative Health: “Calls to poison centers about kratom exposure increased ten-fold from 26 in 2010 to 263 in 2015. More than one-third of the calls reported the use of kratom in combination with other substances, including benzodiazepines, narcotics, and other substances.”

Furthermore, kratom does have mind-altering and habit-forming traits. Most people who support the use of kratom do so because they believe it is an alternative to opiate painkillers. And yes, we do need reliable, safe, non-addictive alternatives to painkillers. But kratom is no such alternative. Not by a long shot.

According to the National Center for Complementary and Integrative Health, “In August 2016 the U.S. Drug Enforcement Administration (DEA) issued a notice of intent to temporarily classify the two psychoactive chemicals contained in the plant kratom (mitragynine and 7-hydroxymitragynine) as schedule I drugs—drugs that have a high potential for abuse and the potential to create severe psychological and/or physical dependence.”

The FDA stopped the DEA from going forward with its classification of kratom as a Schedule I drug back in 2017. The FDA cited public support for kratom and a need for more scientific research into the drug as being the reasons for holding back on a Schedule I label.

The Dangers of Kratom

Even without the Salmonella issue, kratom is still not a “safe” drug. There have been multiple reports of people who have died after taking the drug. CNN reported on this, highlighting extensive data offered by the Centers for Disease Control and Prevention. In analyzing reports from more than 27,000 drug overdoses, the CDC found 152 of the 27,000 overdose deaths showed definite signs of kratom during autopsy tests. In fact, in 91 of the 152 deaths, kratom was designated as the cause of death.

Data from 2017 suggested that kratom was only involved in overdose deaths and that other drugs were also present in such overdoses. But as of April 2019, there are at least 91 proven cases of kratom-caused fatalities. At this point, the FDA has no choice but to ban the drug.

Unregulated substances are not always what they appear to be. Advocates of kratom say that it is a miracle drug that helped them kick heroin or other opiate addictions. Others say kratom helps them with pain relief. But kratom has also caused at least 91 overdose deaths and who knows how many Salmonella exposures.

That is why we have to work towards a drug-free life for all of us. We have to do our research before we consume substances that we do not yet understand. And that goes for prescription drugs, too. Just because a drug is made by a pharmaceutical company does not mean it is safe or “okay” for consumption.

The debate over plant-based drugs, hard street drugs, and man-made drugs is meaningless because all of these drugs pose risks and harm. A better approach would be to pursue a drug-free life, unhampered and unencumbered by any drug use of any kind.

If you know someone who is addicted to drugs, be sure they get help. The most effective approach to overcoming a drug problem lies in getting into and through a residential drug treatment center. Whether one is struggling with a kratom habit or an addiction to something else, any and all addictions should be treated with the most effective and safest means possible. Residential drug treatment centers are the answer to helping people break free from their habits in order to pursue a drug-free life. 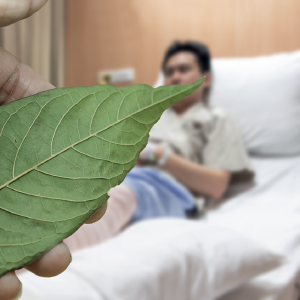 A growing drug trend has surfaced in the U.S. which supports the use of an organic drug called kratom. According to the National Institute on Drug Abuse, kratom is the term for the tropical tree (Mitragyna speciosa) . This tree is native to Southeast Asia.