Why Is the Oklahoma Trial of Opioid-Maker Johnson & Johnson So Significant?

If you’ve missed the news, the State of Oklahoma has sued the personal products company Johnson & Johnson, claiming that this mega-company is substantially responsible for creating the opioid epidemic that has claimed thousands of Oklahomans’ lives. This case is currently being heard in a Norman, Oklahoma courtroom presided over by Judge Thad Balkman.

The case has drawn intensive media attention, as have previous settlements with the state by other opioid manufacturers. Before the Johnson & Johnson case went to trial, Purdue Pharma and Teva Pharmaceuticals settled lawsuits brought by the State of Oklahoma for $270 million and $85 million, respectively.

These three lawsuits are essentially bellwether events that could predict the outcome of approximately 1,900 other lawsuits against opioid painkiller inventors, manufacturers, marketers, distributors or sellers. These other lawsuits that originated with state attorney generals, county or city attorneys, unions, tribes, hospitals and other organizations have been consolidated into one huge Ohio case that’s before a federal judge.

But in Oklahoma, these three pharmaceutical manufacturers were selected for trials. Purdue and Teva decided not to go to trial and settled. Johnson & Johnson decided that a trial was in their best interests.

Here are some of the companies listed in these lawsuits.

Eight members of the Sackler family, owners of privately-held Purdue Pharma, were also sued by the attorney generals of Connecticut and Massachusetts.

What Are the Charges?

As revealed in court documents, marketing methods developed by these companies ranged from the suspect to the ruthlessly fraudulent. Distributors freely provided opioids to pharmacies despite obvious signs that far too many pills were being purchased by small pharmacies in small communities.

Court filings from the Commonwealth of Massachusetts regarding Purdue’s actions and reporting from the Los Angeles Times reveal so much about the typical operations and attitudes of pharmaceutical executives.

For example, as reported in the Los Angeles Times, Purdue’s original sales pitch for OxyContin was that it only needed to be taken once every 12 hours instead of every 4 to 6 hours like other opioid pain relievers. But many patients reporting that their pain returned in 8 hours. Purdue’s response to doctor’s complaining about the shorter duration was to tell them to prescribe higher doses.

“When many doctors began prescribing OxyContin at shorter intervals in the late 1990s, Purdue executives mobilized hundreds of sales reps to ‘refocus’ physicians on 12-hour dosing. Anything shorter ‘needs to be nipped in the bud. NOW!!’”

As reported in the Times: “When many doctors began prescribing OxyContin at shorter intervals in the late 1990s, Purdue executives mobilized hundreds of sales reps to ‘refocus’ physicians on 12-hour dosing. Anything shorter ‘needs to be nipped in the bud. NOW!!’” But higher doses of opioids means a greater danger of addiction.

Before OxyContin, doctors avoided prescribing opioid painkillers unless it was absolutely necessary for a patient in severe pain. That practice ended with OxyContin. As stated in the Commonwealth of Massachusetts’ court filing: “Purdue took advantage of addiction to make money. For decades, physicians had reserved opioids for treating severe, short-term pain, or for patients near the end of life. But the tradition of limiting opioids ended after Purdue introduced OxyContin and began marketing it and other opioids with deceptive claims.”

Here’s some other comments included in the filing by the Commonwealth of Massachusetts:

These and many, many other claims against Purdue and other pharmaceutical companies will be reviewed in court, either in jury trials or ones presided over by a judge, and their truth will be determined. This particular lawsuit continues for 277 pages and it is worth reading, especially if someone you care about has struggled with opioid addiction. You can find it here.

But It Wasn’t Just Purdue

Of course, once other pharmaceutical companies saw Purdue’s rocketing sales figures, they followed suit. Therefore, companies like Teva Pharmaceuticals and Johnson & Johnson have merited their own lawsuits.

In fact, the CEO of Insys Therapeutics of Arizona was arrested in 2017 and in May 2019 and was found guilty of using fraudulent means to market his opioid painkilling formula. Four other Insys executives were also found guilty and two others had previously pled guilty. The CEO has not yet been sentenced.

As noted earlier, Purdue and Teva settled their Oklahoma lawsuits prior to trial. Of course, when a company does so, depending on the terms of the settlement, they may not be required to admit any guilt. They simply pay the settlement amount. In Oklahoma, Teva and Purdue did not admit to any guilt.

The Johnson & Johnson trial may create a precedent that can be applied to the 1,900 other pending lawsuits. If responsibility for creating our current tragic epidemic of opioid addiction and hundreds of thousands of overdose deaths can be assigned, then two things may happen. First, the companies may be required to pay for addressing the problems of addiction, even if it bankrupts them. And second, perhaps more pharmaceutical corporation executives will wind up in jail. That would mean some measure of closure for the families who lost a loved one to a prescription or illicit opioid.

For more than a decade, Karen has been researching and writing about drug trafficking, drug abuse, addiction and recovery. She has also studied and written about policy issues related to drug treatment. 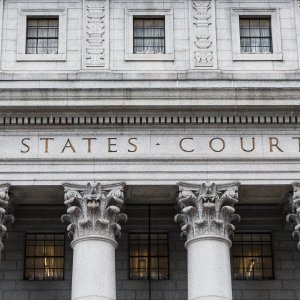