We’ve known for a long time that there can be adverse effects of alcohol consumption. And when we hear about the health implications of drinking, it almost always has something to do with the over-consumption of alcohol (an event known as binge drinking). However, new data suggests that merely “frequent” drinking (but not necessarily binge drinking) can increase one’s risk of heart rhythm disorders.

First, let’s define some terms, then we’ll dive into the reported research.

According to the National Institute on Alcohol Abuse and Alcoholism, “NIAAA defines binge drinking as a pattern of drinking that brings blood alcohol concentration (BAC) levels to 0.08 g/dL. This typically occurs after 4 drinks for women and 5 drinks for men—in about 2 hours.”

Frequent drinking is quite easy to define. It merely means consuming alcohol often, having a drink once per day, etc. Not necessarily drinking to the point of “binging,” but still drinking often. That’s the keynote here. It’s the regularity of alcohol consumption that clarifies this form of drinking.

According to the National Heart, Lung, and Blood Institute. “Atrial fibrillation is one of the most common types of arrhythmia, which are irregular heart rhythms. Atrial fibrillation causes your heart to beat much faster than normal. Also, your heart’s upper and lower chambers do not work together as they should. When this happens, the lower chambers do not fill completely or pump enough blood to your lungs and body.”

New Research on the Risks of Frequent Drinking

U.S. News reported on a new study published in the journal EP Eurospace. Researchers from the Korea University College of Medicine in Seoul, South Korea, analyzed data from about 9.7 million people. The researchers analyzed patient health data from 2009. Then, the researchers followed the health histories of each patient for eight years, through to the end of 2017.

Over the eight years and the millions of patient case records examined, the most substantial risk factor for patients having a-fib (atrial fibrillation) heart conditions was a high frequency of alcohol consumption.

In fact, the most significant risk was in those patients who drank alcohol every day, as opposed to only drinking once or twice per week. Even if the patients only had one drink per day, they were still in the highest risk band for atrial fibrillation if they drank every day or almost every day.

The Importance of Reducing Alcohol Consumption

This new research is immensely valuable. For decades, we have believed that the way to minimize harm in alcohol consumption was merely not to drink too much. Even the medical community more or less took on the standard that a drink a day was okay. For generations, the focus has been on the quantity of alcohol consumed, not the frequency.

And the U.S. Department of Health and Human Services defines “low risk” drinking in a similar fashion. “If alcohol is consumed, it should be in moderation—up to one drink per day for women and up to two drinks per day for men—and only by adults of legal drinking age.”

But the new data is very clear. And it is yet another good reason why people should keep their alcohol consumption to an absolute minimum. The problem with alcohol is that the only way to guarantee one will never develop an alcohol habit is to never drink alcohol at all. The truth is, any amount of alcohol consumption can and does create some degree of risk for addiction. And now we have just learned that even keeping one’s alcohol consumption to “a drink a day” is not a healthy decision.

As the years go by, and as the research data becomes better known and follow-up research is published and peer-reviewed, it is likely that institutions like the National Institute on Alcohol Abuse and Alcoholism and the U.S. Department of Health will change their tune on frequent drinking. But we should get a head start on this. We should all work together to cut drinking frequency down to an absolute minimum.

Getting Help for Addiction

For those who have struggled with alcohol addiction in the past, the only way to ensure future sobriety is to remain abstinent from all drugs and alcohol. It's simply not worth the risk to try and "control" one's drinking, if that was even possible.

When someone is addicted to alcohol, their priority has to be getting clean. Once clean, they must refrain from any alcohol consumption at all. It is clear enough that alcohol carries with it health risks, even when consumed in moderation. But for those in recovery, any amount of alcohol is too much. Even just one drink is one drink too many.

And for those who have never struggled with alcohol addiction, they should still keep their drinking to an absolute minimum. It’s the safest, smartest, and healthiest approach.

Trying to Have a Baby? A New Study Suggests Mom AND Dad Should Cease Alcohol Consumption

A new study from the European Journal of Preventive Cardiology has drawn a link between alcohol consumption before pregnancy and future, congenital birth defects. 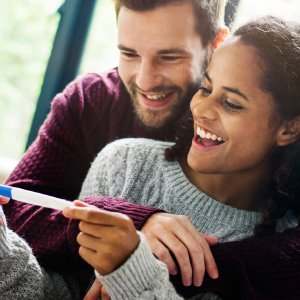